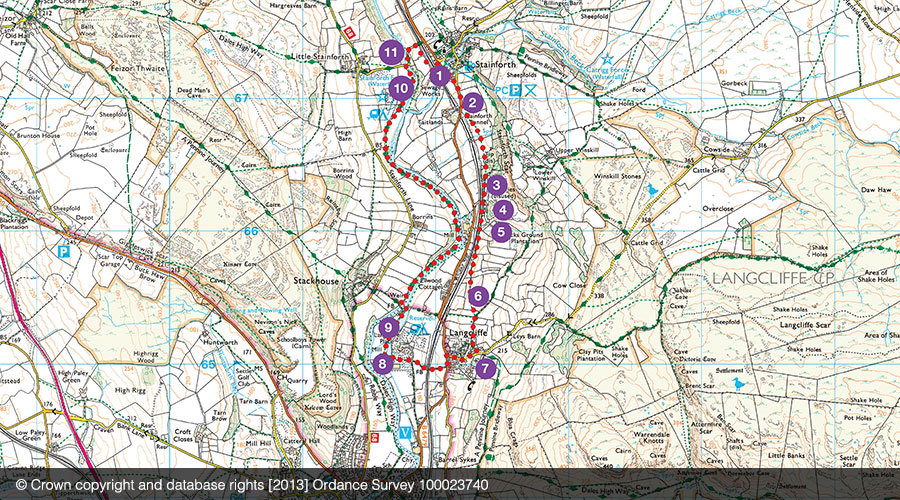 Low level walk, but can be muddy and slippery in wet weather with difficult stiles

This walk is full of surprises: from the best preserved Hoffmann kiln in the country to a secret mill pond and a famous waterfall where you may see salmon leaping in autumn.

1. Several pubs in the area are called after the Craven Heifer. This was a real cow bred on the Duke of Devonshire’s estate at Bolton Abbey. She grew so big (312 stone, 11 feet long, 7 feet tall) that she was shown all over the country. A special doorway needed to be made to get her in and out of the cow shed!

3. The Craven Lime Works consist of three different types of lime kiln. The Hoffmann kiln was built in 1872 and is the best preserved of its kind in the UK. Its 22 entrances led into 22 separate chambers where blocks of limestone were stacked to roof height. Coal was added, the chambers were sealed, and the blocks burned over several days to produce lime. This was sent to the growing industrial towns in West Yorkshire by rail.  It was hot and unpleasant work and closed in 1939.

6. The Langcliffe Community Gardens were created thanks to funds from the National Lottery Heritage Fund, via YDMT. It has fruit trees, beehives and a beautiful circular bench. Wildflowers have been planted as part of the Meadow Links project which aims to restore a network of wildflower meadows – great for bees!

7. Langcliffe was once an important leather processing place. It was home to two textile mills, a paper mill, a tannery for making leather, a quarry, five inns, and two churches. It is now a sleepy village.

8. Langcliffe ‘High’ Mill was one of Yorkshire’s earliest and largest cotton spinning mills. Built in 1783-4 it contained an Arkwright cotton spinning machine because Richard Arkwright was a friend of the mill owners. The company began weaving cotton in the 1820s with the power looms housed in a single storey building known as Langcliffe Shed, which is now Watershed Mill. In the 1930s High Mill employed 250 people, with 100 working at Langcliffe Shed. The business closed in the mid 1950s. The millpond used to take water from the River Ribble to drive the water wheel of the cotton mill. It’s a third of a mile long and could generate 40 horsepower of energy.

10. Stainforth Foss is a good place to watch salmon leap in autumn as they return to lay their eggs. Atlantic salmon are ‘anadromous’ as they spend part of their life in the ocean but breed and lay their eggs in freshwater. Eggs are laid in autumn and hatch in spring.