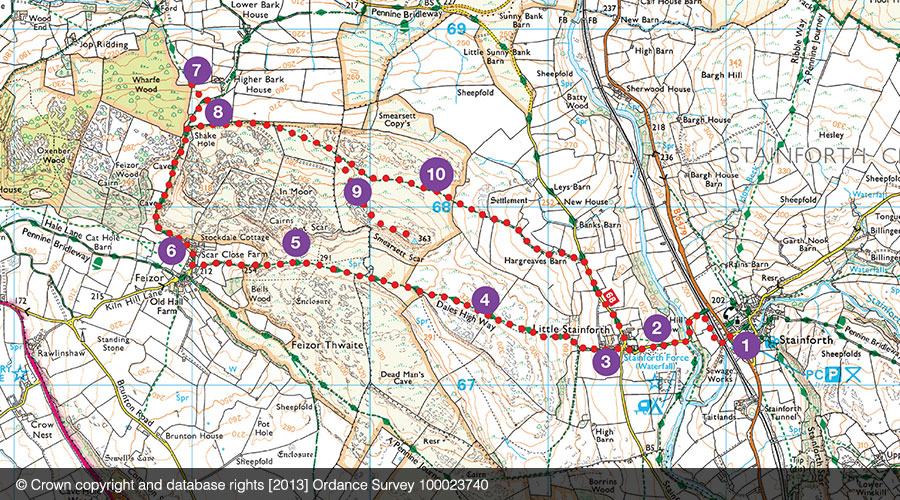 This is a beautiful walk with a lofty, airy feel and a café half way round. An extension into Wharfe Woods in spring to see the carpet of wildflowers is stunning.

1. Stainforth or ‘stony ford’ is named after the stepping stones across the river in the village. It was a prosperous farming community belonging to Sawley Abbey near Clitheroe. Signs of early fields can be seen on the terraces to the north of the village. In the 18th and 19th centuries the village became a hive of industry with two water-powered cotton mills, a linen works, leather and paper making, and brewing. Today it has a population of 200 people living in 100 dwellings.

2. Stainforth Bridge is a packhorse bridge built in 1675 by Samual Watson, a prominent Quaker who was jailed because of his faith. It is next to a ford across the river. It was only wide enough for horses carrying packs to cross and was on the ancient monastic highway from east to west. It was given to the National Trust in 1931.

3. Knight Stainforth Hall was rebuilt in 1672 by Samuel Watson. One of its owners was knighted by the King, hence the name. It has several false windows at the front, which were blocked up when a new tax was introduced in 1696 based on the number of windows a house had.

5. Smearsett means the ‘shieling’ or summer settlement where butter was made. The shieling may have been Feizor.

6. Standing all on its own in the middle of a field the ‘Celtic wall’ is about 65ft long, 5ft high and 5ft at the base. No one has any idea why it was built. If it were less broad, it would have been a ‘bield’ wall, for sheep to shelter behind depending on which direction the wind blew.

7. The tiny village of Feizor used to be an important staging post for the monks who owned enormous sheep farming estates in the Middle Ages. It is now a hidden gem away from the main roads with a fabulous café!

8. Oxenber, Feizor and Wharfe Woods cover a limestone knoll which is now a Site of Special Scientific Interest. It has been traditionally grazed so many of the flowers have been undisturbed and bluebells, primroses, oxlips, wood anemones, violets and orchids abound. Trees are mainly ash and hazel with some hawthorn and rowan. Villagers once had the right to graze and shelter their animals here and to gather wood and nuts.

In the woods look for coppiced hazel trees, which have been cut down to ground level so that young, straight branches grew which were cut for fencing and building, and for the large lime kiln that once stood in the woods. Also look out for black matted pellets on the floor – these are regurgitated food which the owls living in the woods spit out and which contain tiny bones and fur.