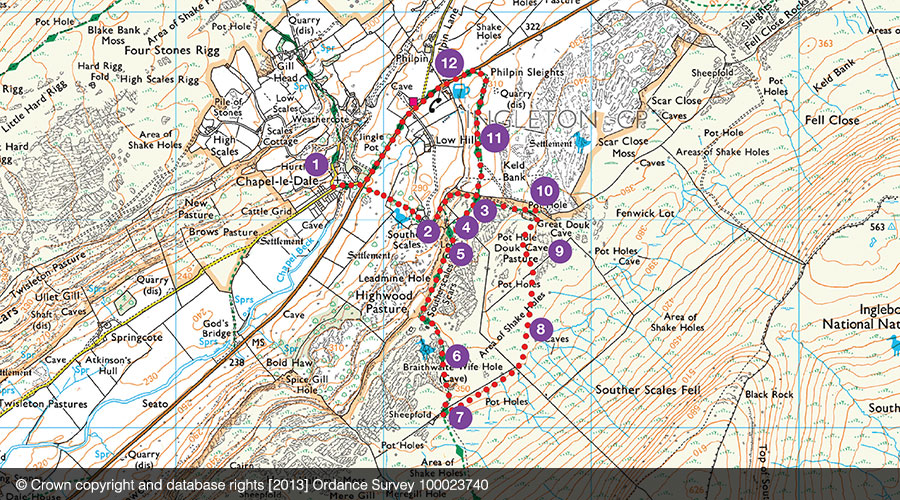 The Hill Inn pub. Nearest toilets are Ingleton or Horton in Ribblesdale

This walk begins in the charming hamlet of Chapel-le-Dale, visits an amazing limestone pavement, a huge hole in the ground, and has spectacular views towards the Irish Sea.

1. The Church of St. Leonard is only 48 feet long and 20 feet wide. During the building of the Ribblehead viaduct more than 200 people from the shanty towns died and are buried in this churchyard.

4. Southerscales Nature Reserve, owned by Yorkshire Wildlife Trust, includes a huge limestone pavement which was sculptured by glaciers during the last Ice Age. The blocks or ‘clints’, and gaps or ‘grikes’, shelter a variety of ferns and wildflowers. Large bivalve fossils or ‘brachiopods’ can be found: a reminder that the limestone was formed under the sea 350 million years ago.

6. Braithwaite Wife hole is a 60 metre deep depression or ‘doline’ with a cave entrance at the bottom. It is the largest surface hole in North Yorkshire! Do not climb down – danger!

7. Shake holes and swallow holes pit the landscape all around. They are holes made by acidic rain water dissolving the rock. Streams disappear underground to join rivers in the caves below. Look for a metal lid covering the entrance to Knacker Trapper, possibly named after the people who disposed of dead animals.

8. The Washfold was used to wash and dip sheep to clean the fleeces prior to clipping. The farmer would dam a stream creating a deeper pool or ‘dub’ and the jumble of walls nearby held the sheep before washing.  Here the stream plunges underground into the darkness.

10. Great Douk Cave is where the underground stream from the Washfold re-emerges 200 meters away. It is a great cave for guided groups. Do not enter without a guide.

11. The Lime kiln is where farmers used to burn limestone quarried from behind the kiln. They made quicklime which was spread on the fields to make the grass grow better for the sheep.