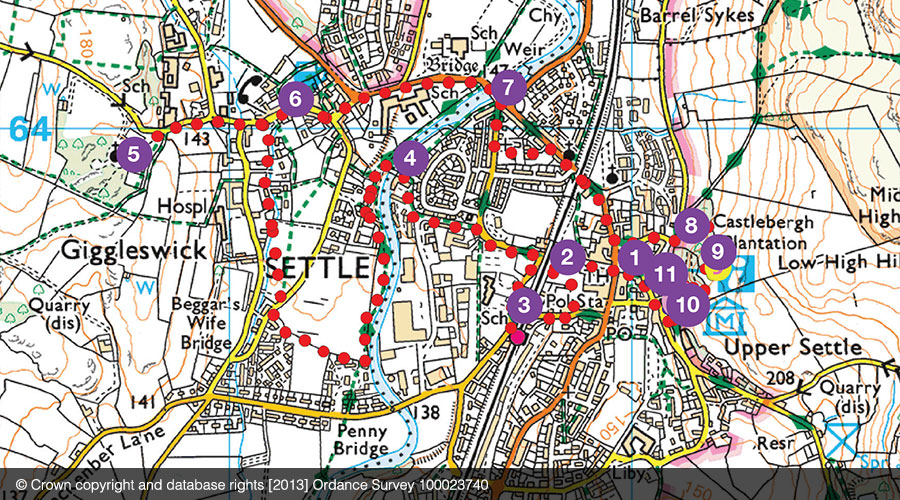 This walk is an exploration of a typical English market town with its market square cricket pitch and famous son. There is the option to walk up Castleberg Crag with spectacular views over Settle.

1. A market has run in Settle since 1249 and still takes place every Tuesday. On one side of the Market Place are the six arches of the Shambles. The Town Hall was built in 1832, Ye Olde Naked Man dates back to 1663 and Ye Old Naked Woman is nearby in Langcliffe. The Victoria Hall is possibly the world’s oldest music hall with painted actdrop dating back to 1882.

2. In the 17th century it was illegal for Quakers to meet to worship or be buried in church grounds. However, a plot of land called Howson’s Croft was given for use as a Quaker burial ground. Meetings took place here in a barn until the Friends Meeting House was built in 1678 for £80. It is still in use today and you are welcome to visit.

3. Settle Station is the first station on the famous 116 kilometre Settle Carlisle Railway built by the Midland Railway Company in the 1870s.  The line had to cross the Pennines so 20 tunnels and 14 viaducts, including Ribblehead Viaduct, were built. The Water Tower was one of eight watering places for steam locomotives on the line and is the only one remaining. It is now a private house.

4. The River Ribble flows through Settle. It runs 120 kilometres from Yorkshire to the Irish Sea! Along its banks you may see grey wagtail, pied wagtail and dippers bobbing on the rocks and mallard, heron and goosander fishing for prey.

5. Giggleswick School is one of the oldest public schools in England and was built in 1512. The chapel with its’ copper dome was a gift from local benefactor, Walter Morrison MP.

6. St Alkelda’s Church was probably named after a 10th century saint who was strangled for her faith! The church has a beautiful carved oak pulpit and Poor Box dating from 1684. It is said that one churchwarden kept small fish in the baptismal font before he went fishing.  Part of the churchyard is a wild flower meadow.

7. At Settle Weir some of the river water has been diverted through a sluice gate to turn a huge Archimedes Screw to generate electricity. To one side is an eel ladder and on the other a salmon pass.

8. Castleberg Crag is the impressive cliff towering over Settle. It is a favourite local climbing spot with 24 different routes up the rock face.

10. The Folly was built in the 1670s as a family home and is now the Museum of North Craven Life and has a café in the old kitchen.  The North Craven Building Preservation Trust who own the Folly have acquired Zion Congregational Church and plan to renovate it.

11. Benjamin Waugh was born in Settle, the son of a saddle maker. He became a Congregationalist Minister and worked in the slums of Greenwich in London where he witnessed poverty and cruelty. He founded the National Society for the Prevention of Cruelty to Children (NSPCC) in 1889.