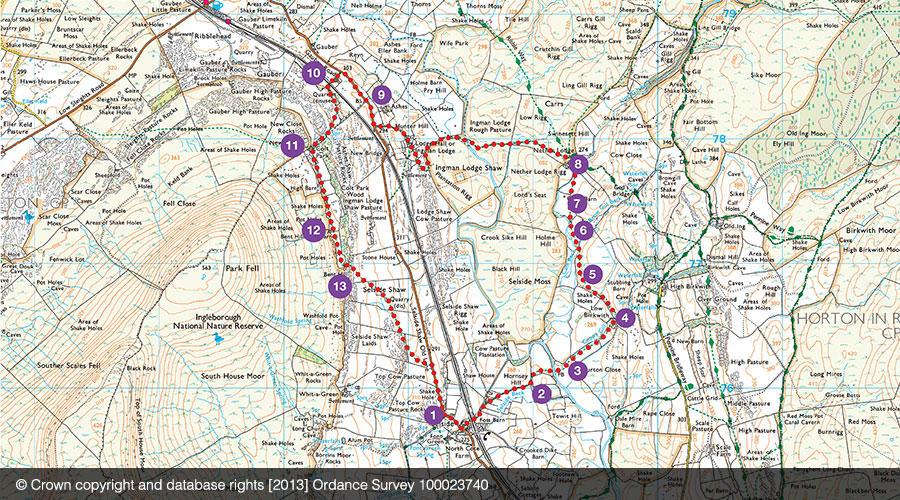 Selside. Park on unmade lane just off B6479 to north of Selside and almost opposite Top Farm Bed and Breakfast. Postcode BD24 0HZ

No facilities in Selside. Cafés and toilets in Horton in Ribblesdale

This walk follows the young River Ribble, crosses a drumlin and goes through hay meadows, which have been restored to their original colourful glory.

1. The River Ribble is very close to its source on Gayle Moor beyond Ribblehead. It is the only major Yorkshire river to flow west into the Irish Sea 121 kilometres away, and not east through the Humber Estuary into the North Sea.

2. It may be very muddy here but you are in classic drumlin territory, every Geography student’s heaven. These are mounds of sediments dropped by the glaciers when they retreated more than 12,000 years ago. From above they look like a basket of eggs.

8. Nether Lodge was once managed by the Cistercian monks at Furness Abbey. They owned huge estates in the Dales which they managed from a main grange at Newby near Clapham.

9. Ashes Pasture Nature Reserve is an upland hay meadow rich in summer with wildflowers, and frequented by curlews, cuckoos and barn owls, because it has been unaffected by modern farming. It is owned by Yorkshire Wildlife Trust and is a Site of Special Scientific Interest (SSSI).

10. Salt Lake Quarry – another SSSI owned by Yorkshire Wildlife Trust, is a disused quarry where limestone was extracted and used to build the nearby railway. It is home to many different and fragile habitats.

11. Colt Park was a lodge belonging to Furness Abbey which almost certainly bred horses. The barn you pass is the headquarters of the Ingleborough National Nature Reserve with more than 1,000 hectares of land owned and managed by Natural England to protect the flowers, insects and geology of this spectacular scenery.

12. In these fields you might spot some science experiments! Here Natural England is working with universities to study the many benefits that hay meadows provide for both wildlife and people. Flower-rich meadows used to be common in the Yorkshire Dales but since the 1950s many fields have been artificially fertilised and whilst grass has thrived, the flowers have been lost.

13. Bent Hill Rigg Barn is a traditional Dales barn. Hay is stored here to feed sheep and cows in winter. It is today also used to shelter PaD visitors during lambing time.