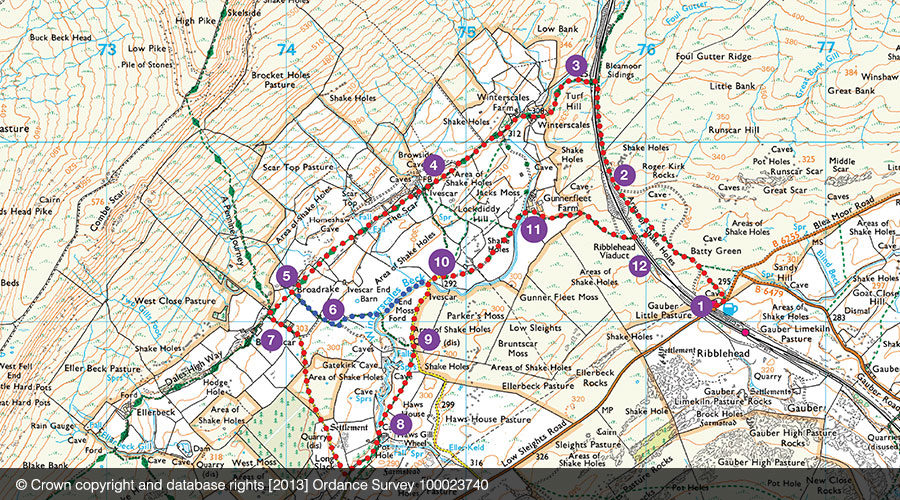 Café, visitor centre, and toilets at Ribblehead Station and Station Inn for food

On this walk you’ll discover the challenges involved in building the Settle Carlisle Railway, and witness a disappearing stream - a fascinating feature of limestone country.

1. Ribblehead Station is on the Settle Carlisle line, the last railway built in England in the 1870s by the Midland Railway Company. Along the 116 kilometre line there are 20 viaducts and 14 tunnels, one of which is the spectacular Ribblehead Viaduct.

2. Batty Green Shanty Town was constructed where the viaduct is now and was the temporary settlements where the railway ‘navvies’ lived. In 1871 there were 74 buildings a population of 342, and workers came from 34 different counties. The weather was often wild and windy more than a hundred workers died through disease, hypothermia and industrial accidents.  Their graves can be found at St Leonard’s Church in Chapel-le-Dale.

4. Whernside, which you walk along the bottom of, is the highest peak in Yorkshire, and one of the famous Three Peaks. The bridleway is part of the Dales High Way long distance walk from Saltaire to Appleby. You are following the spring line where streams emerge from deep underground, and farmers used to collect their water.

5. Broadrake dates back to at least the early 17th century and was a traditional farm. Today it is a bunkhouse sleeping 20 people and the owners have made the rocky field at the back into a hay meadow. Courses in traditional skills are run here. From Broadrake look back to admire Ribblehead Viaduct and in front to Ingleborough across the valley.

9. Upstream of Winterscales Beck the stream has dissolved the limestone and is now running through the system underground.

12. The imposing Ribblehead Viaduct with its 24 arches is 400 metres long and 32 metres high, though four meters higher at the northern end than the southern. It took six years to build and was an incredible feat of engineering. The visitor centre at Ribblehead Station is worth a visit.