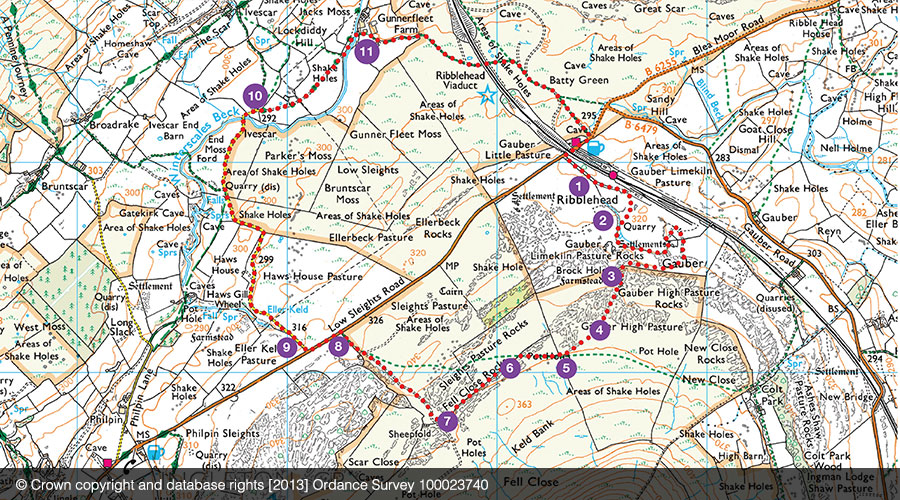 Park at Ribblehead Quarry off B6255, on the other side of the tracks to Ribblehead Station (LA6 3AS). To get there go past Station Inn if heading towards Ingleton, under railway bridge and immediately left up unmade track. Parking circle is 400 metres on left

Explore an old limestone quarry which is slowly being reclaimed by nature and visit an old settlement on the slopes of Ingleborough.

1. The Quarry is now part of the Ingleborough National Nature Reserve, but began in the late 1800s to provide limestone for building the Settle Carlisle Railway. In 2000 it was donated by Hansons to Natural England, and has been left alone to see how nature reclaims it.

2. The stone bench recreates the Ingleborough skyline. There are holes to pour water down showing how water flows through the cave systems. Ribblesdale has a huge number of caves. Some have been excavated and gives glimpses of life long ago. 130,000 years ago, the climate was warmer and herds of rhinos and elephants roamed this area. 11,000 years ago, a hunter lost an antler harpoon point, which was dragged into a cave by scavenging hyenas.

3. Gauber farmstead dates back to before the Norman Conquest and families lived and farmed here well over a thousand years ago! The foundations of three buildings, a long house, kitchen and workshop around a central yard, can be seen in the grass. This was excavated in the 1970s and animal bones, coins and iron objects were found.

4. People have lived and farmed this land for thousands of years. Sleights Pasture contains a large chambered Neolithic stone cairn (29 metres across and 1.6 metres high). It was excavated in the 1800s and contained a stone coffin with an entire human skeleton. It is badly damaged but you can still make out the shape.

6. Between the 12th and 16th centuries, the monks farmed sheep so well that this became the main farming activity. Since then, Dales farms have traditionally reared sheep, along with a few beef cattle, with dairy herds in the lower valleys.

7. In the late 18th and 19th centuries cattle were driven long distances from Scotland providing ‘meat on the hoof’ to the growing towns of Lancashire and West Yorkshire. Great cattle fairs were held at places like Gearstones (near Ribblehead).

8. The B6255 may have been a major Roman route through the Pennines from the Lune Valley in the west to Bainbridge in the east. It was a trade route for goods such as metalwork, fabric, pottery and jewellery as well as news and fashions.

9. During the late 18th and 19th centuries, common farmland was enclosed by drystone walls under the Enclosure Acts. Some of these walls date from this period and give the land its ‘patchwork’ look, although others are much older.