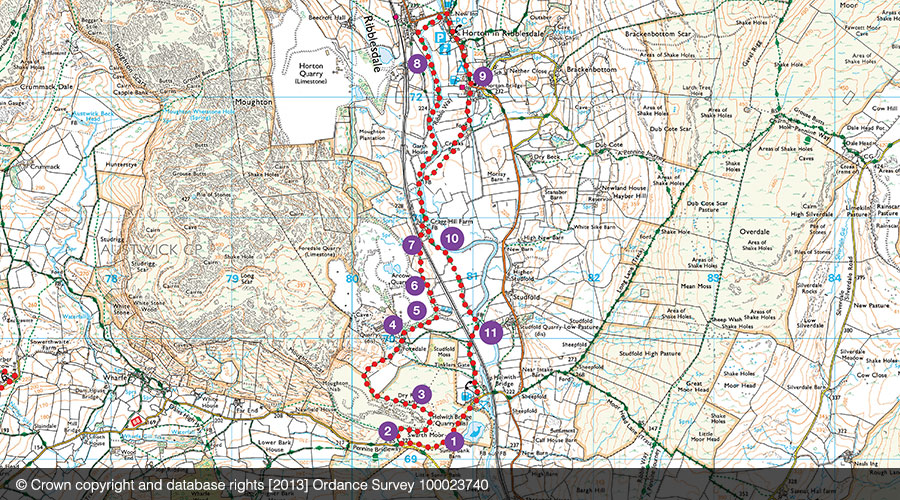 Dry Rigg and Horton in Ribblesdale

Toilets in National Park car park, 2 pubs and a café in Horton in Ribblesdale

This walk gives you a bird’s eye view of a working quarry, joins the Ribble Way long distance footpath and visits one of the oldest churches in the Dales.

1. Swarth Moor is a rare lowland raised peatbog and Site of Special Scientific Interest (SSSI). Locals used to cut peat in early summer, leave it to dry and store it for fuel in the winter. Now the land is protected for the important wildlife habitats that are home to many rare and scarce plants and animals such as bog rosemary, small pearl-bordered fritillary butterflies and great crested newts (which are found here and nowhere else in the Yorkshire Dales National Park).

2. The pool in the Conservation Area was constructed in 2007 to create a wetland for wading birds and amphibians. It is an example of how an industrial site can be restored. Today frogs, toads and newts live here and otters have been spotted. Fifty species of birds frequent the quarry and a hundred pairs of sand martins build their nests in the gravel. Oystercatchers, redshanks and lapwings arrive in the summer.

3. Dry Rigg Quarry produces a rock called gritstone which is dug and crushed on site and shipped out by lorry or train. It is a very hard-wearing rock which is anti-skid so is used for motorways and aircraft runways.

4. The Viewing Enclosure gives a bird’s eye view of the operations of the quarry and Swarth Moor SSSI. There are information boards and a collection of Musical Rocks.

5. Foredale Cottages were the workers cottages for a now disused quarry. It was the location for the film ‘A Lad’ produced by a former Settle College pupil about a disillusioned teenager who was befriended by a Yorkshire Dales National Park Ranger.

6. Railway Crossing This is one of the only manned crossings of a railway in England. Each day a railwayman has to come and make sure there is no one trying to cross the railway whilst a train is coming.

7. The Three Peaks is a 38.6km long walk up Pen-y-Ghent, Whernside and Ingleborough. Walkers try to finish it in under 12 hours. Some runners can do it in under three hours.

9. St Oswald’s Church was built in the 1100s but was named after St Oswald, an early English Martyr who lived from 605 to 642. He was converted to Christianity as a teenager during exile in Scotland, by the monks of Iona. The tower was added in the fourteenth century.

10. The Ribble Way is a 117km footpath which follows the River Ribble from Longton, west of Preston through Ribchester, Clitheroe and Gisburn before continuing to its source at Gavel Gap near Ribblehead.