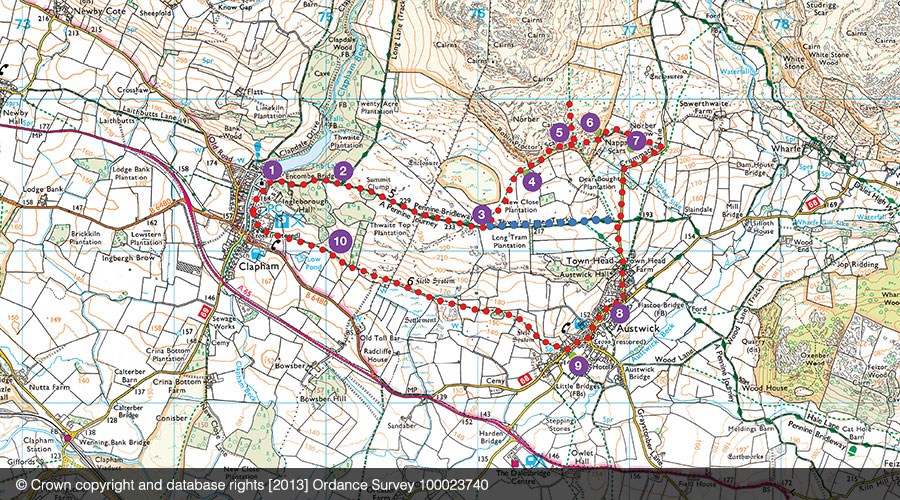 This walk takes you along green lanes that link two beautiful Yorkshire Dales villages and visits the huge boulders at Norber Erratics.

1. Clapham Church was originally built 800 years ago but the oldest part is the 15th century tower. It was rebuilt by the Farrer family of Ingleborough Hall in 1814. They also built the tunnels so that people using Thwaite Lane could not look into their grounds.

2. Thwaite Lane is an ancient route between Clapham and Austwick and was once used by the monks who owned big sheep farming estates. These old roads were high above the wet valley floor.

3. Robin Proctor Scar is named after a local farmer. One day he was returning home, so the story goes, taking the direct way home over Thwaite Scar instead of sticking to the safe but longer route home. He was caught out in thick fog, lost his bearings and fell over the edge of the cliff, killing both horse and rider!

5. Norber Erratics are huge sandstone rocks in the wrong place. They came from a kilometre north of here and were moved by glaciers and left stranded when the ice melted over 12,000 years ago. Many appear to be balanced on smaller limestone rocks underneath.

8. There are many tales about the villagers of Austwick who were thought to be a bit simple. One story is about a cuckoo. Whenever the cuckoo was around there was good weather, so the villagers built a cage around the nest to trap the cuckoo and keep the summer – but before it was finished the cuckoo took fright and flew!

10. Lynchetts are the remains of an ancient field system created over a thousand years ago by Anglo Saxon farmers. They were earth terraces dug by hand on the side of a hill to maximise the use of land for agriculture.